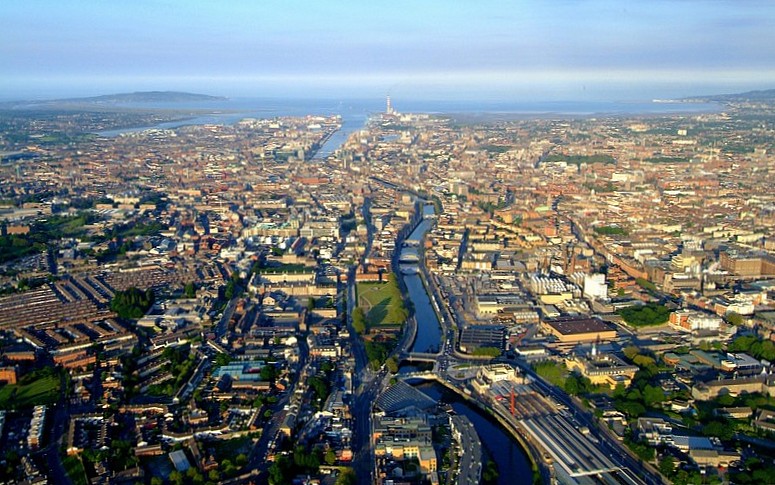 Deeper into the south side and you’ll find the skyline dominated by the impressive Aviva Stadium (Previously known as Lansdowne Road) home of the Irish International Soccer and Rugby teams.  Around this area of the Southside you’ll find a prevalence of Rugby Clubs, and a large number of tennis clubs and place names borrowed from a colonial past – Bath Avenue, Fitzwilliam Square, Wellington Road, Waterloo Lane.

Conversely, historically the northern side of the river was mainly populated by the less affluent local Gaelic residents. It was on the Northside where the local Gaels overcame the Vikings to reclaim control of Dublin at battle of Clontarf in 1014. That turned out to be the last great victory for the Gaels on the battlefield.

More recently it was the Northside that hosted Europes worst tenements and slums of the early 20th century.  From these areas rose the civil strife of the trade union lock out of 1913 and it’s subsequent influence on the nationalist rebellion of 1916.

Thankfully the poverty of the Dublin slums are now a thing of the distant past but the difference in cultural influences on either side of the river is still pronounced.

A lot of the street names north of the river have been reclaimed to names of local nationalist heroes like O’Connell Street, Parnell Square, Griffith Avenue and  Collins Avenue.

On the Northside- it just feels that things go a little more native – for instance on Smithfield  the traditional home to Dublin’s ancient monthly horse market, – you’ll hear some of the best traditional Irish music in a pub called The Cobblestone. It’s one of the few locations in the city where live authentic traditional music is performed every night without any entrance fee.

If you’re feeling a bit more adventurous then you can check out the famous traditional musical hangout of Tigh Hughes on Chancery Place (Not far from Smithfield) – where you can take your chance and you might fall into an impromptu traditional music session. (It’s in Tigh Hughes where traditional musicians regularly congregate to exchange their tunes.- there are no set times it just depends on the musicians and again no cover charge applies)

During the day and from a sporting perspective north of the river you’re more likely to find a Gaelic Club (GAA) where indigenous games are played more commonly than international imports.

As you stray Northside from the city centre you may stumble upon Irelands Largest Stadium, the national cultural icon that is Croke Park – The home of indigenous Gaelic Games.

Croke Park is probably the most impressive symbol of  a quiet modern Gaelic Cultural revival.

Less than a century after emerging from 800 years of colonial control it’s remarkable that the HQ of an association dedicated to the promotion of Gaelic Culture is now the third largest modern stadium in Western Europe.

The Gaelic Stadium of Croke Park now ranks with the great Camp Neau in Barcelona, Wembley stadium  in London and the San Siro in Milan.

However the beautiful modern stadium is just a physical manifestation of  a  uniquely Irish cultural grassroots organization called the GAA. (Gaelic Athletic Association)

Remarkably the GAA claims a membership of one in every six people on the Island of Ireland.  It’s has over 2200 clubs spread across the land yet it is little known overseas outside the Irish community.  It’s through its local clubs that it promotes Gaelic Culture through the playing of Ireland’s ancient games of Hurling, Gaelic Football , Gaelic handball and Rounders.

Our members at Experience Gaelic Games explain the GAA and it’s influence best with their immersive activity – they’re also based on the Northside!

Through history this small island has witnessed and hosted many invading forces but wave after wave they have been integrated into Gaelic Culture, so some say that the northside is secretely working on taking back the southside some time soon!!

So when in Dublin make sure to sample all sides of Dublins rich mix of culture and which ever side you find yourself on in Dublin – Northside or Southside – at that moment it will always be the rightside!!

At Adventure Dublin We’d love to hear your Dublin adventure stories – North or South – drop us your tale to adventuredublin@gmail.com

Others have also booked